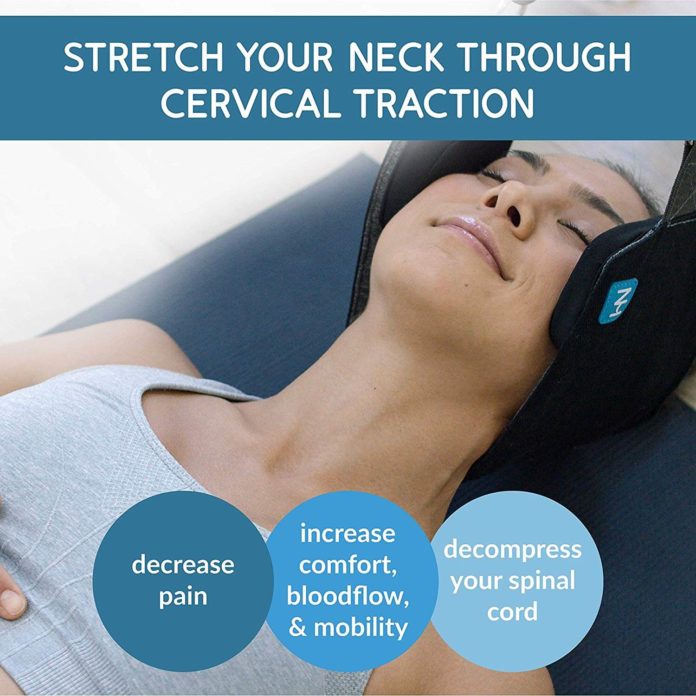 NeckRelax (Neck Pain Muscle Relaxer) is a handy neck hammock which is lightweight and portable. It can be carried easily and set up almost anywhere, as long as there is a hook, rail or door handle to support the device.

Once set up, this handy device can be used to gently stretch the muscles in the neck, relieving tension and pressure in the upper vertebrae. This improves the circulation to muscles and nerves in the neck, reducing pain instantly.

The Neck Hammock is a simple, portable, FDA approved medical device that attaches to any door, rail, or pole and promises to provide professional-grade neck pain relief in ten minutes or less. Despite this, the website claims it costs less than a single physical therapy session.

The Neck Hammock accomplishes this using mechanical cervical traction, which boosts circulation and promotes proper alignment, potentially leading to additional benefits like boosted energy, reduced stress, improved sleep quality, and better posture. All you have to do is lie back and relax.

Although The Neck Hammock was created by a licensed physical therapist, does this mean it really will help make solving your neck pain easy, as claimed on the website? Before diving in, let’s start by discussing the underlying issue.

Just like discomfort in any other part of the body, neck pain is your body’s way of letting you know that something’s wrong—but not specifically what’s wrong. In fact, My Virtual Medial Centre explains that:

“Neck pain can present in any of the seven cervical vertebrae (back bones) connecting the base of skull to the thoracic cage. As well as the cervical spine, muscles, ligaments, and soft tissues can also be a source of neck pain. In addition, other structures like the trachea (wind pipe), blood vessels, thyroid gland, and lymph nodes are also found in the neck and can be a source of pain.”

With this said, Spine-Health reports the most common causes of temporary neck pain are sleeping in the wrong position, sports-related injuries, poor posture, repetitive motions, holding the head in an unusual position, and whiplash.

On the other hand, chronic neck pain is frequently the result of cervical degenerative disc disease, herniated disc (as mentioned on The Neck Hammock site), osteoarthritis, stenosis with myelopathy, and foraminal stenosis.

Obviously, to figure out which—if any—of these is causing your neck pain, you’ll need to have an in-depth discussion with your doctor. In the meantime, let’s take a closer look at the cervical traction offered by The Neck Hammock.

1)Using the medical principle of traction, NeckRelax elevates the head off the ground, therefore relieving weight and pressure on the neck.

2)By gradually stretching the muscles in the neck, NeckRelax increases the blood flow and circulation around the vertebrae by gently expanding the space between them. This allows for the muscles to receive more oxygen, aiding recovery, increasing mobility and reducing pain.

3)This is an effect way of relieving neck pain in general, but can also help patients who are suffering from trapped or pinched nerves and herniated or bulging discs.

4)This simple gadget can be used at home, in the office or outdoors. NeckRelax has been engineered carefully so that it can be used in a variety of different places, as long as there is a sturdy hook, rail or door handle to fix the device to.

What’s the Story Behind The Neck Hammock?

The Neck Hammock was originally launched via a November 2017 Kickstarter campaign, which ultimately raised more than $900K on an original goal of just $20K. In fact, the makers tell us the campaign was fully funded within three hours. Since then, they’ve gone on to raise another $1.2 million through Indiegogo.

From a company perspective, The Neck Hammock, Inc. is based out of Santa Monica, CA and was founded by Steve Sudell, whose bio lists him as a Licensed Physical Therapist, Athletic Trainer, and Level 2 Fascial Stretch Therapist. Steve is also owner of Prehab2Perform, a Venice, CA-based outpatient sports physical therapy service.

According to The Neck Hammock website, Steve’s impetus for creating the device was to “give people an alternative solution to mechanical cervical traction completed at their physical therapist’s office that was affordable, convenient, and highly effective.”

Our Bottom Line About The Neck Hammock

Considering its unique design, patented padding that comfortably molds to the contours of your head, and FDA approved status; its ability for users to individually control traction levels, the ease of use and portability, and the fact that it doesn’t include a chin strap that can potentially cause TMJ, there seems to be a lot to like about the Neck Hammock.

On top of this, it appears to be a massive crowdfunding success, having raised nearly $2 million between the company’s Kickstarter and Indiegogo campaigns.

However, there weren’t any refund or warranty details listed on The Neck Hammock website at the time of our research, nor any way of getting in touch with the company.

Get yours now by clicking the button below which automatically generates your discount. ACT FAST BEFORE THE DISCOUNT EXPIRES.

BUY YOURS NOW AT 50% DISCOUNT